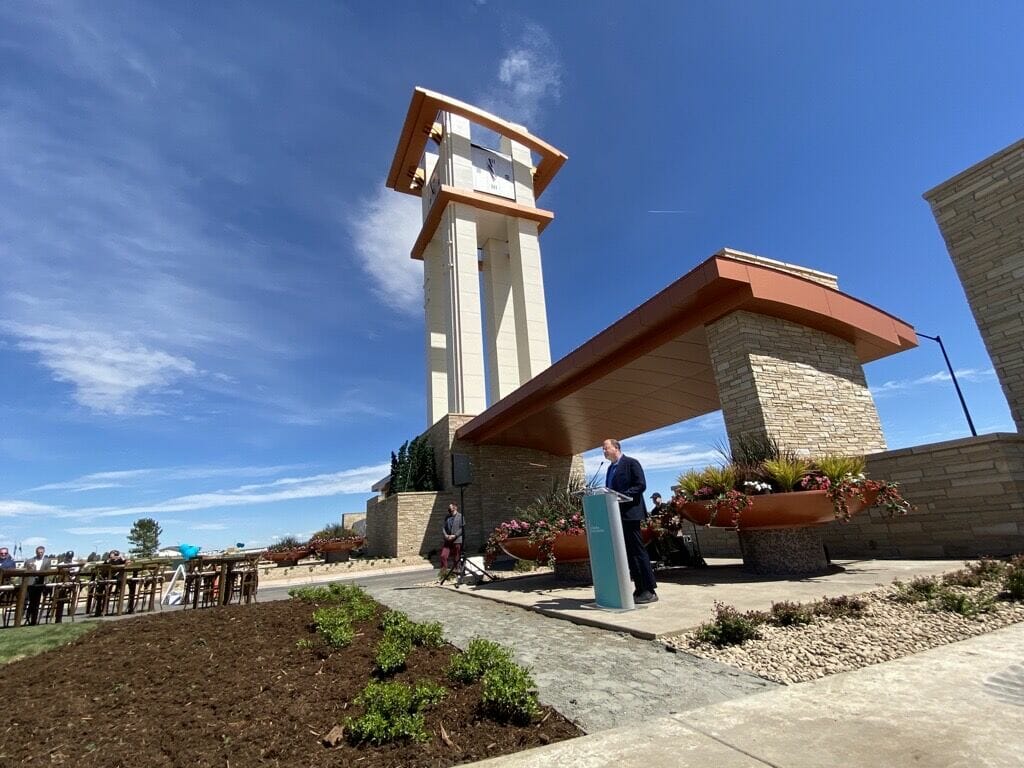 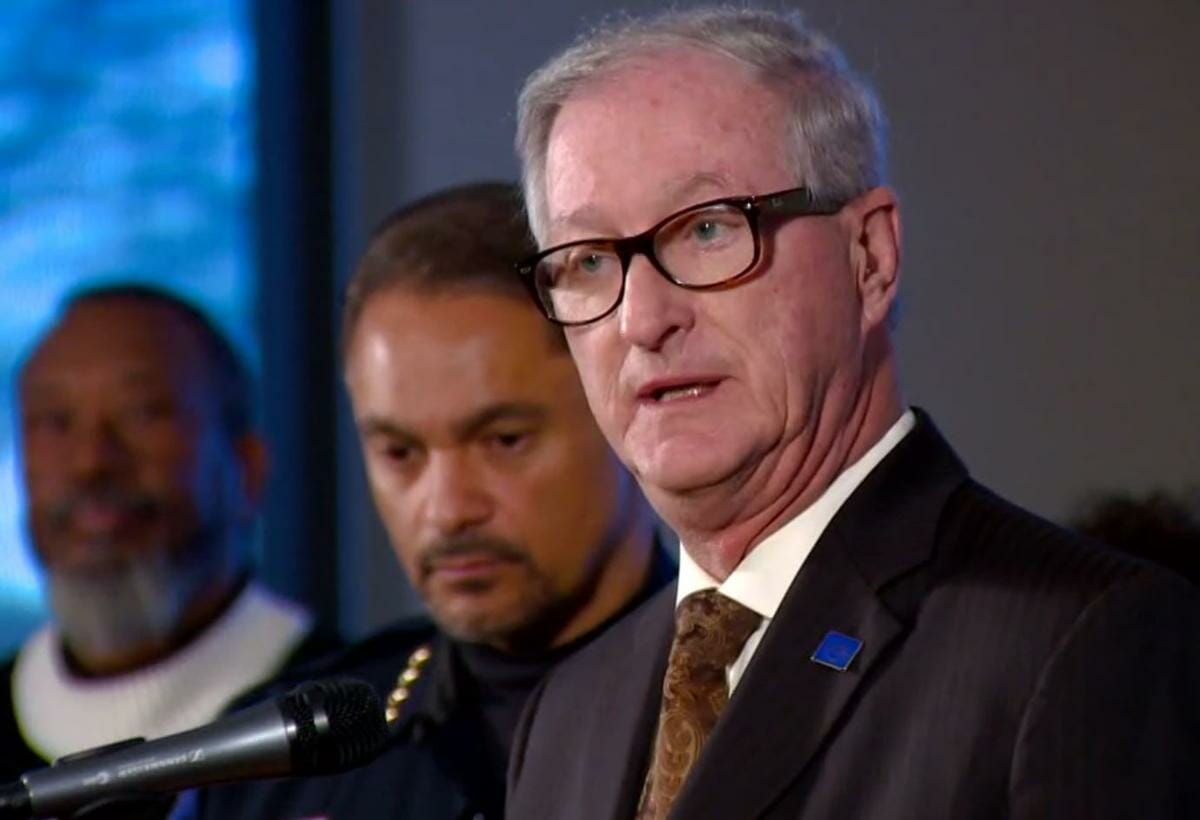 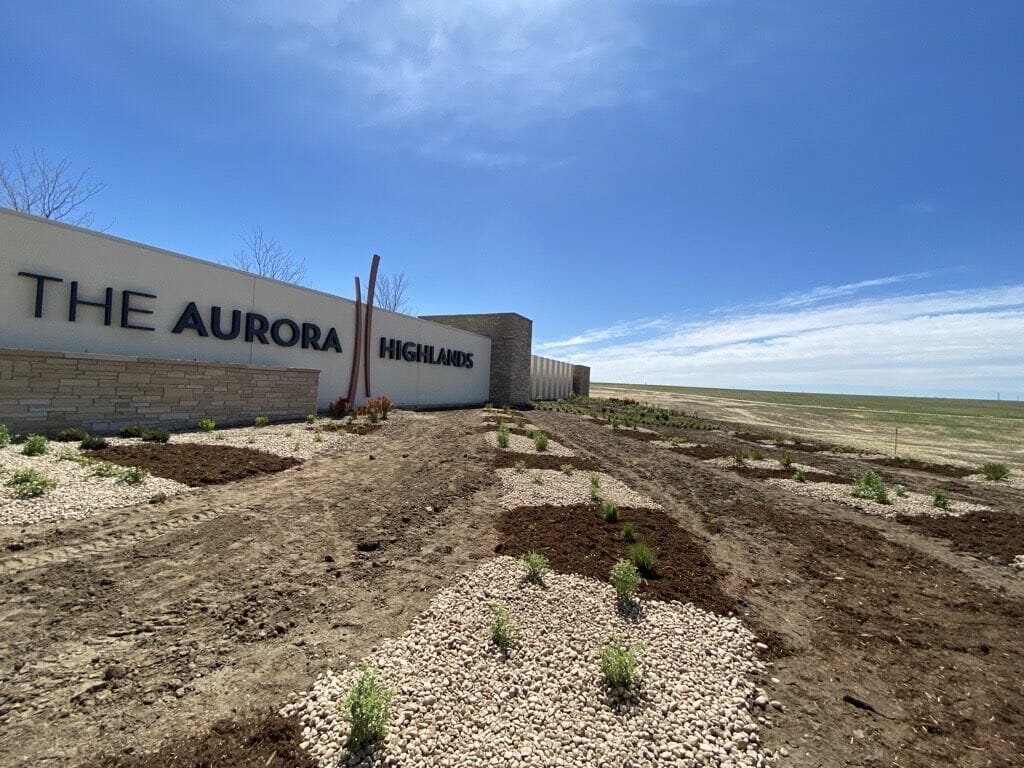 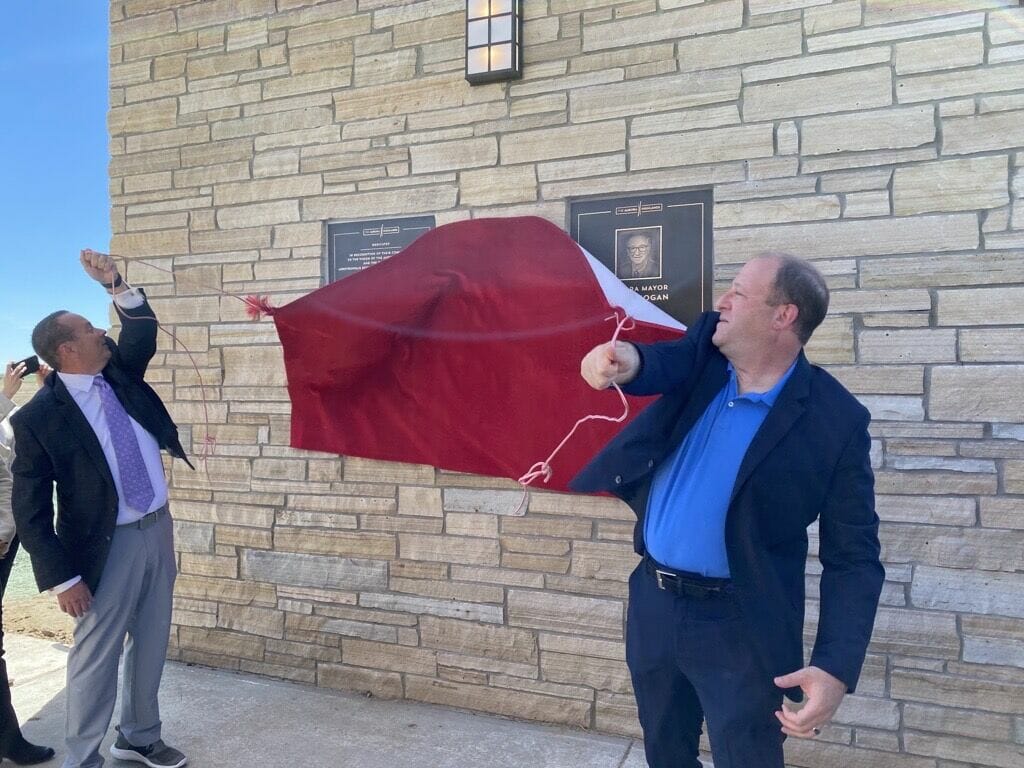 As huge, yellow earth-movers leveled the landscape around Aurora’s newest housing development, politicians and real estate developers gathered to unveil a plaque dedicated to the man who envisioned the 3,700-acre site.

Former Aurora Mayor Steve Hogan saw Colorado’s population exploding, and pushed for the expansive piece of land in an area south of Denver International Airport to serve as a community for middle-class Coloradans. The area became known as Aurora Highlands.

“What Colorado needs the most right now is housing,” Colorado Gov. Jared Polis told the crowd, including Hogan’s family. “Mayor Hogan was able to see something that others couldn’t. It makes a difference far beyond the boundaries of Colorado.”

Hogan was 69 when he died of cancer, three years to the day of Thursday’s celebration. He served Aurora from 1974 until his passing in 2018, including six terms on the Aurora City Council and being elected Mayor in 2011. During his tenure with the city, Aurora’s population more than doubled from 160,000 to 360,000.

Hogan’s widow, Becky, who is running for an Aurora City Council-at-large seat, said that Aurora Highlands could not have broken ground without the cooperation of people with different backgrounds and political parties. Her late husband, she said, was the one who brought everyone to the table.

“That man’s skill set was collaboration. You can’t do projects like this one without reaching across the aisle,” she said.

“There were fiscal issues, drainage issues and other technical things he had to work through,” his friend and political colleague, Aurora City Councilman Dave Gruber said. “Some owners were working in their best interests, but there was never a Democrat/Republican fight at that time.”

Under Hogan’s leadership, “There wasn’t any ‘I do this for you, you do this for me,’” he said. “For Steve, it was all about the vision.”

For Hogan’s family, the event to honor his legacy on the anniversary of his death was bittersweet.

”He was always more concerned about the goal that everyone needed to accomplish rather than focusing on politics,” added his son, Timothy, who sat at Hogan’s family table on a Colorado blue-sky day.

Hogan started his political career as a Democrat, but eventually decided to switch parties and become a Republican.

“I remember when that happened. I was 12 years old, “ Hogan’s daughter, Elizabeth, told Colorado Politics. She said he sat the family down to tell them. “There was going to be a formal announcement that he was changing parties. We always got him little donkey ornaments and we were going to have to start getting him elephants instead.”

Hogan was also passionate about transportation, and was a big part of the development of E-470 in the late 1980s. He eventually oversaw the tollway’s operations as executive director of the highway authority.

Aurora Highlands sits just off of the E-470 tollway at the 38th Aurora Highlands Parkway interchange. The property’s rolling fields will soon be home to parks and hiking trails. A clocktower overlooks the entrance to the development where people have begun to move in.

The area is a part of the “Aerotropolis,” a subregion centered around DIA and among the hottest real estate markets along the Front Range. Adams County and Aurora city planners predict that the area will be home to the 180,000 people who live and work around the airport.

“Toward the end of his tenure, before 2017, the political environment reflected more of a small town. But now it’s much more complicated to get things accomplished. Now Aurora is the 54th largest populated city in America,” said Coffman. “I wish he could have been here to see this; to see his legacy come into fruition.”