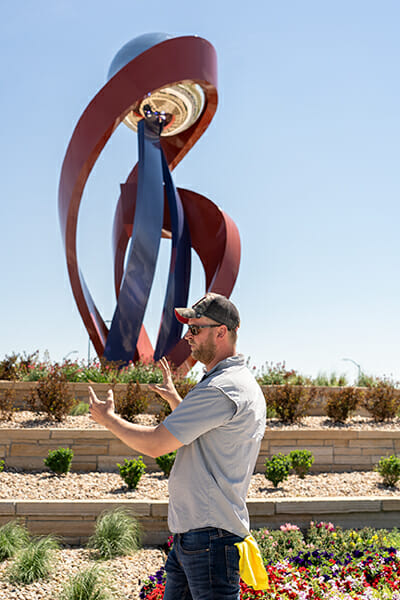 AURORA | Drive down E-470 and you might catch a glimpse of the newest — and one of the largest — pieces of public art in the city of Aurora.

The statue “Life Blood” by Arkansas-based artist Hunter Brown was installed last week, and is part of a series of more than two dozen planned public art installations throughout the new development that will be installed over the next several years.

The abstract sculpture was installed by crane on Aug. 1, at the roundabout on Aurora Highlands Parkway just past the planned community’s signature clocktower. The Parkway follows the floodplain that runs through the development, which will be transformed into Highlands Creek Park, a two-mile long parkway following the creek with a cycling/walking trail, picnic areas, playgrounds and other features throughout.

The park will also include 25 pieces of public art along the two-mile trail, with Life Blood being the first that residents and visitors will see upon entering the development.

The 8,500-pound statue stands 28 feet tall (34 feet with the base) and contains two football fields worth of welded metal, according to artist Hunter Brown. Brown created the sculpture over the course of five months at his Little Rock, Ark. studio, Innovative Sculpture Design.

He and his team drove it more than 1,100 miles to Aurora. The sculpture was attached to a flatbed truck that had to be specifically measured to fit through underpasses on the trip.

“It’s like playing chess,” Brown said of the logistics that went into moving the sculpture.

He said he specifically created Life Blood to look interesting from all angles, since it is located in a roundabout. While as a piece of abstract art its meaning is open to interpretation, he said he was inspired by a sense of community while creating it.

“I wanted to push that idea of togetherness,” he said.

Brown has site-based sculptures in over 25 other states, but this is his first work of art in Colorado. Along with creating Life Blood, Brown will have several other pieces installed in Highlands and is the art coordinator for the entire development.

Carla Ferreira, director of on-site development and principal for the Highlands, said that the artists work in different styles but were selected to complement each other.

“All the artists are finding something in common that makes it symbiotic, but their mediums are different,” Ferreira said.

Earlier this summer several works of art by Olivia Steele were put in place at the start of the development and along the path. Steele creates signs that look like road signs but have positive messages and other types of word art on that.

Steele’s signs in Highlands include the sayings, “happiness is only real when shared,” “embrace the mystery” and a bilingual sign that says “If not now, when?” in English on one side and in Spanish on the other.

The next pieces of art to be installed will be several totem-like sculptures from artist Lisa Solberg, which will be put in place this fall. Solberg’s sculptures will be placed right next to the creek, and are designed out of materials that can be submerged in water in case of flood.

The path will have several pedestrian tunnels, which will feature sayings including “the only way out is through” in neon lights and other art on the walls and ceilings.

Solberg is based in New York City, and Steele is based in Berlin. The Highlands will also install art from Daniel Popper, a South African artist. Ferreira said that she wanted the art at the Highlands to represent a global community and to feature artists who are younger.

Ferreira said that public art has always been a part of the vision for the Highlands. Initially the art was going to be in separate locations throughout the 4,000-acre development, but later planners decided to put the art along the park trail.

The park was modeled after the Highline in New York City and will also be similar to the Cherry Creek Bike Path. Ferreira hopes that the park will be a source of enjoyment for people who live in the community and serve as a draw for people who live elsewhere in the area.

“This is really a permanent art gallery that’s free to the public,” she said.