A bold look at Denver area’s future: In Aurora, first large master plan in years has a fall-themed preview next weekend (Oct. 26-27)

As in previous master plans like Highlands Ranch and Stapleton, homebuyers will be lured by a range of single-family and multifamily designs, offered in eight residential villages.

Denver’s amazing popularity with homebuyers — driving some of the fastest growth now in the entire nation — is prompting a bold look at the prime development opportunities along E-470 south of DIA, where the metropolitan area is about to get its first real master-planned community created in many years.

If you’re driving E-470 south of the new Gaylord Rockies Resort & Convention Center, you can already see a 110-foot clock tower rising east of the beltway’s toll plaza that will become a grand entryway to The Aurora Highlands — planned currently as a 3,150-acre community that will become home to more than 32,000 residents.

As in previous master plans like Highlands Ranch and Stapleton, homebuyers will be lured by a range of single-family and multifamily designs, offered in eight residential villages. There will be a mix of homes for families wanting affordability, as well as move-up homes and semi-custom designs, providing an amenity-filled community for all homebuyers.

For families, all of this offers the lifestyle that drove the success of previous master plans — with 400 acres of parkland and over 500 acres of open space, dozens of parks and 21 miles of trails; along with what developers have named The Ice and Recreation Center, to house a climbing wall, basketball court and hockey rink; plus The Water Park, with indoor pools, water play structures, outdoor volleyball court and sun deck. There are four school sites planned.

Developer Carlo Ferreira says the accessibility here will also appeal to dual-income households, as they are located between DIA, the Anschutz campus, DTC and/or north I-25 — all within reach.

“This is the most conveniently located site in the metro area for a true master-planned community,” he says, noting that driving from downtown Denver to the site is about 15 minutes — 38 minutes during rush hour.

Ferreira and his team, with vast experience around the southwestern U.S., began watching this site in 2014.

“We recognized that new-home construction had not met pent-up demand, and not able to keep up with rapid job and population growth here,” he says. “Even now, home deliveries are running short of meeting true demand, as dictated by the region’s vibrant growth.”

That, says Ferreira, has six major builders with national reach making their plans for The Aurora Highlands, including Colorado-based Richmond American and Century Communities, plus a builder familiar in northern Colorado, Bridgewater Homes, bringing semi-custom homes into metro Denver.

“We’re thrilled to introduce a unique product,” said Leslie Moen, Bridgewater’s co-founder, “and to create a community in partnership with The Aurora Highlands that’s truly different than what’s currently offered.”

Stop by to sign up on the priority reservation list at the Sneak Preview on the weekend of Oct. 26-27, 10 a.m. to 5 p.m., with fall festivities, food trucks, hayride, giveaways and a pumpkin patch.  Homebuyers on the priority list can preview sites and reserve one before they’re released to the public.

From northbound E-470 about 2 miles north of I-70, exit The Aurora Highlands Parkway (Exit 22) and turn east; or learn more at TheAuroraHighlands.com.

The Article in Print: 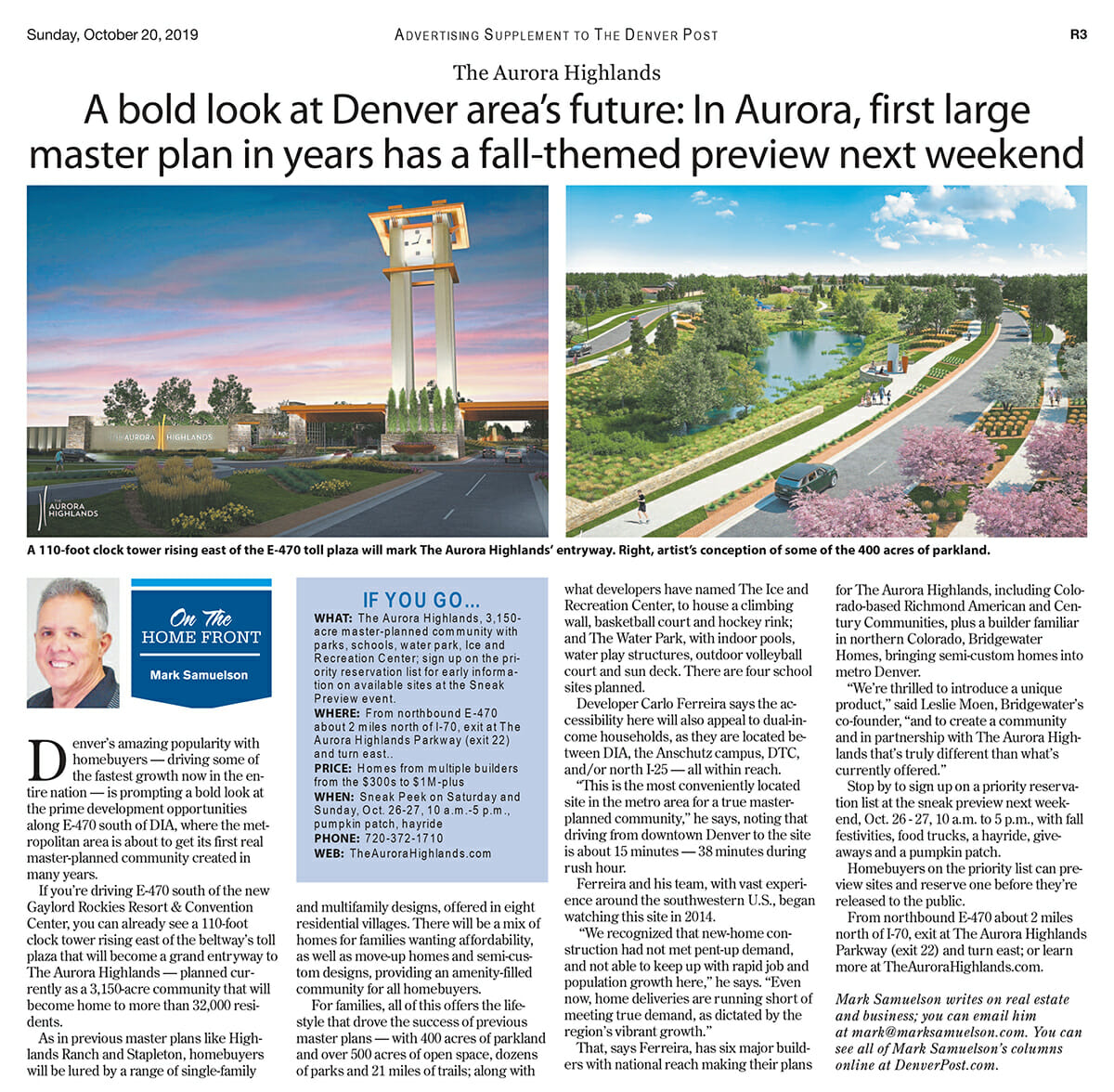